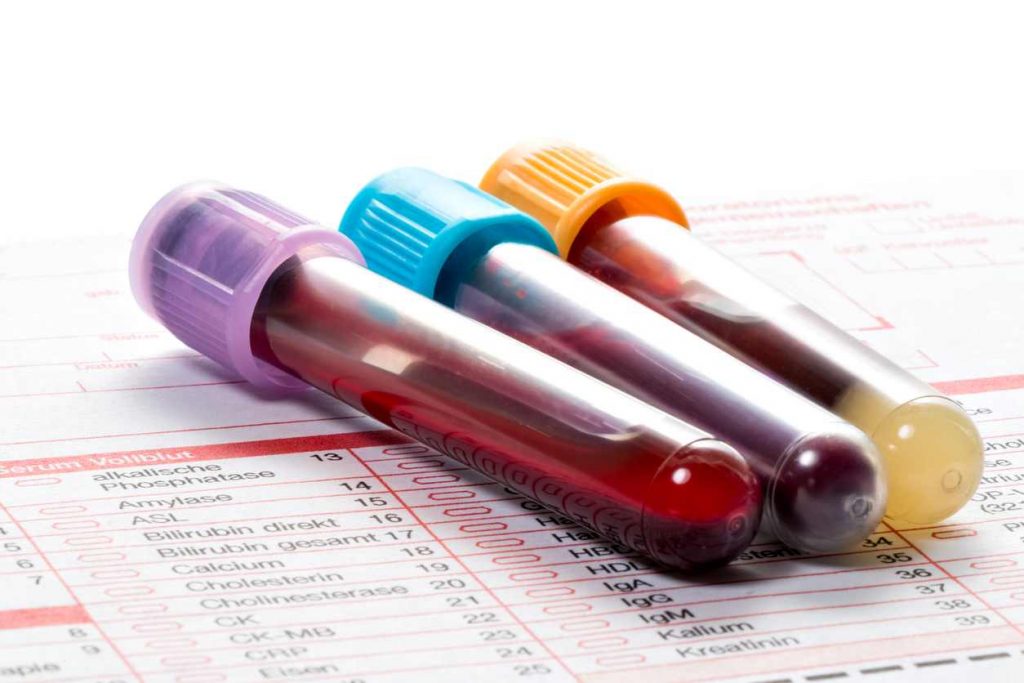 Information about the type, number and appearance of cells in the blood

The Full Blood Count (FBC) provides important information about the type, number and appearance of cells in the blood, especially red blood cells (vital for carrying oxygen around the body), white blood cells (key to the body’s immune system), and clotting cells (important for controlling and stopping bleeding).

This is an important test for the diagnoses of anaemia which is caused by insufficient red blood cells or haemoglobin as assessing immune function.

My Hair Doctor partners with Medichecks to provide a comprehensive, health check system.

Who is the Test for

This Full Blood Count (FBC) is for individuals who wish to establish the health of their blood whilst providing answers to the health of their hair. It is an important test for anyone who has symptoms of anaemia or who suspect a viral or bacterial infection. As well as this if you suspect hair loss, hair thinning, loss of hair density or hair fragility this is a suitable test for you.

Haemoglobin carries oxygen and gives the red blood cell its red colour. This test measures the amount of haemoglobin in the blood and is a good measure of the blood’s ability to carry oxygen around the body.

A high haemoglobin result can mean increased red cell production to compensate for chronically low oxygen levels in the blood caused by lung disease or living at altitude. While it can also indicate “blood doping” other causes can include dehydration, smoking and bone marrow disorders.

A low haemoglobin result indicates anaemia which can have many causes including pregnancy, blood loss, liver damage, iron deficiency and much more. A low haemoglobin level should be investigated in line with other symptoms and results.

HCT (haemocrit) measures the amount of space (volume) red blood cells take up in the blood.

Raised levels can result from pregnancy, living at altitude, dehydration as well as low availability of oxygen through chronic lung disease and even sleep apnoea.

Red blood cell (RBC) count analyses the number of red cells in the blood. Red blood cells carry oxygen from the lungs to the rest of the body. They also carry carbon dioxide back to the lungs so that it can be exhaled.

A high count (thicker blood) means there is a chance that the red blood cells will clump together and block tiny blood vessels. This also makes it difficult for your red blood cells to carry oxygen.

A low count (anaemia) means that your body may not be getting the oxygen it needs and can be caused by nutritional deficiency (lack of iron, folic acid, vitamin B12), over-hydration as well as bleeding and bone marrow disorders.

A high result may indicate a vitamin deficiency of folate or vitamin B12 and is often seen in excessive alcohol consumption associated with liver inflammation.

MCH (mean corpuscular haemoglobin) is the average amount of haemoglobin contained in your red blood cells.

Together with MCV and MCHC, MCH results can help in the diagnosis of different types of anaemia.

A high level can indicate the presence of spherocytes (a type of red bood cell with too much haemoglobin) or a deficiency of folic acid or vitamin B12 in the diet.

RDW (red cell distribution width) shows whether the cells are all the same size or different sizes or shapes. Normally cells are fairly uniform, although a raised RDW result (indicating greater variation in cell size and shape than is normally seen) can be caused by deficiency in iron, vitamin B12 or folic acid.

White blood cells are key to your body’s immune or defence system. They fight infections and protect your body from foreign invaders such as harmful germs and bacteria.

A raised white blood cell (WBC) count can indicate recent infection, inflammation, trauma and even stress. Your WBC can also be raised when taking certain medications.

A decreased WBC can result from a vitamin deficiency such as folate or vitamin B12, as well as liver disease and diseases of the immune system.

Neutrophils are a type of white blood cell that are responsible for helping your body fight infection. When neutrophils are low you can be more vulnerable to illness and infection.

Neutrophils can be raised after severe stress on the body from a bacterial infection, recent exercise or sudden kidney failure.

Low neutrophils can be caused by a deficiency in vitamin B12 or folic acid, severe bacterial infection and some autoimmune diseases.

Lymphocytes are a type of white blood cell which fight bacterial and viral infections. They include T cells, B cells and natural killer cells.

Lymphocytes can be elevated for many reasons but it is common for them to be raised after recent infection, particularly after the flu. They can also be raised due to autoimmune disorders and some cancers.

The most common cause for lymphocytes to be depleted is the common cold.

Monocytes are a type of white blood cell that engulf and remove pathogens and dead or damaged cells from our blood. The heat and swelling of inflammation is caused by the activities of these cells.

Low levels can be due to autoimmune disorders such as lupus and rheumatoid arthritis as well as drugs which affect the bone marrow such as those used in chemotherapy.

Eosinophils are a type of white blood cell whose function is to remove parasitic infections as well as to regulate inflammation to mark an infected site.

Levels of eosinophils can be elevated if the scale of inflammation is greater than necessary to control the damage (as is the case in asthma and allergic responses) as well as in parasitic and fungal infections, autoimmune diseases and skin disorders.

Low levels of eosinophils are not usually cause for concern and can be caused by the administration of steroids.

Basophils are a type of white blood cell that protect your body from bacteria and parasites such as ticks.

An elevated basophil count can be due to inflammatory conditions such as Crohn’s disease, ulcerative colitis and dermatitis, recent infection and hormone imbalance (e.g. hypothyroidism).

A low basophil count can be caused by pregnancy, stress and use of steroids.

A blood film report is an examination of the shape, size and number of blood cells under the microscope. Oxygen is carried less effectively by red blood cells if they are of abnormal size or shape, and this can result in anaemia. Too many or too few white blood cells can signify a blood disorder and can affect your body’s ability to fight infection.

Platelets or clotting cells are the smallest type of blood cell and are important in blood clotting. When bleeding occurs, the platelets swell, clump together and form a sticky plug (a clot) which helps stop the bleeding.

If platelet levels are raised there is an increased risk of blood clots forming in blood vessels.

If platelet levels are too low there is a risk of easy bruising and uncontrolled bleeding.

MPV (mean platelet volume) is a measurement of the average size of your platelets. New platelets are larger than older ones and a raised MPV result occurs when increased numbers of platelets are being produced. MPV provides an indication of platelet production in your bone marrow.