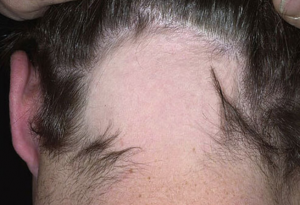 What is alopecia areata and who is affected?

Alopecia means loss of hair or baldness. There are several different causes and patterns of alopecia. Alopecia areata is one type of hair loss. In the UK, it is estimated to affect about 15 in 10,000 people. Alopecia areata can occur at any age but most cases first develop in teenagers and children. At least half of the people with alopecia areata develop their first patch of hair loss before they are 21. Males and females are equally affected. The condition tends to be milder when it first develops at an older age.

What are the symptoms of alopecia areata?

The first picture shows several patches of alopecia on the scalp in someone with fairly extensive alopecia areata. The second picture shows an area of alopecia of the beard area. When a bald patch first develops, it is difficult to predict how it will progress.

The following are the main ways it may progress: 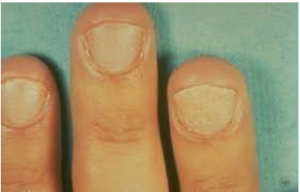 Some people become self-conscious, anxious or distressed by the appearance of the hair loss.

Alopecia areata is thought to be an autoimmune disease. This occurs when your own immune system damages healthy cells in your own body. The immune system makes white blood cells (lymphocytes) and antibodies to protect against foreign objects such as bacteria, viruses, and other germs. In autoimmune disease, the immune system mistakes part or parts of the body as foreign. In people with alopecia areata, many white blood cells gather around the affected hair roots (hair follicles) which are mistaken as foreign. This causes some mild inflammation which leads in some way to hairs becoming weak and falling out to cause the bald patches. It is not known why it is common for only certain areas of the scalp to be affected. Also, the affected hair follicles are not destroyed. Affected hair follicles are capable of making normal hair again if the immune reaction goes and the situation returns to normal. It is not known why alopecia areata or other autoimmune diseases occur. It is thought that something triggers the immune system to react against one or more of the body’s own tissues. Possible triggers include viruses, infection, medicines or other environmental factors. There is also an inherited factor which makes some people more prone to autoimmune diseases. About 1 in 5 people with alopecia areata have a close relative who is also affected. If you have alopecia areata you also have a slightly higher than average chance of developing other autoimmune diseases such as thyroid disorders, pernicious anaemia and vitiligo. (However, it is important to stress that most people with alopecia areata do not develop any of these other conditions.)

Do I need any tests?

Usually not. The diagnosis is usually based on the typical appearance of the bald patches. If there is doubt about the cause of the hair loss, sometimes some blood tests or a skin scraping from a bald patch may be done to rule out other causes. A small sample of skin (skin biopsy) is sometimes taken to look at under the microscope. Occasionally you may need some tests to check for other autoimmune diseases. For example, if you have certain other symptoms, you might need to have blood tests to check your blood count and thyroid function.

What is the outlook (prognosis) for people with alopecia areata?

However, even if your hair grows back fully after an episode of alopecia areata, it is common to have one or more recurrences of the condition throughout your life. A few people who develop alopecia areata will progress to total scalp baldness (alopecia totalis). Even fewer people will lose all scalp and body hair (alopecia universalis). Progression to these more extensive types of hair loss is more common if:

What are the treatment options for alopecia areata?

Not treating is a common option Alopecia areata is a very unpredictable condition. In many cases, bald patches re-grow by themselves without treatment. In particular, if there are just one or two small bald patches then many doctors would advise that you simply leave it alone at first. This is sometimes called watchful waiting. If the hair loss is not too bad then there is a good chance that your hair will re-grow after several months. (Any re-growth usually does not start within three months of hair loss.) A change in hairstyle may perhaps conceal one or two small bald patches. If the hair loss becomes more extensive then the decision on whether to treat can be reconsidered. But even with extensive hair loss, there is still a chance that hair will re-grow without treatment. Note: alopecia areata itself won’t damage your general health and so not treating will not lead to any general health problems. When considering any treatment choices, you should take into account the possible side-effects that some of the treatments may have. Also, treatments promote hair to re-grow and do not affect or cure the underlying cause of the condition. Steroid injections Injections of steroid into the bald patches of the scalp suppress the local immune reaction that occurs in alopecia areata. This can then allow the hair follicles to function normally again for hair to re-grow. This treatment may be an option for one or more small- to mediumsized bald patches. Steroid injections are thought to be the most effective treatment for patches of alopecia areata that are not too big. However, they do not work in every case. This treatment is usually only done by a skin specialist and referral to hospital will usually be needed. Several injections (about 1 cm apart) are usually given at each session of treatment but the number is often limited by pain. Therefore, large bald areas are not suitable for steroid injections. It takes 1-2 months for the hair to start to regrow. Injections are repeated every 4-6 weeks. Note: there is no guarantee that any hair re-grown during treatment will persist once the treatment is finished. Rub-on (topical) steroids Steroid cream, gel, etc, may help hair re-growth but does not work as well as steroid injections. It may be worth a try if you have bald patches that are not suitable for steroid injections, or if you are waiting to see a specialist to have steroid injections. If re-growth occurs, it takes 3-6 months. There is no point continuing with this treatment if you do not develop any re-growth after 3-6 months.

Topical minoxidil solution This is rubbed into the bald patches and has been shown to promote hair re-growth in some cases. This is the same treatment that is used for the common male pattern baldness. It is not known how it works. The success rate is not high but may be worth a try – in particular, if you have more extensive bald patches that are not suitable for steroid injections.

Minoxidil is not available on the NHS. You need a private prescription and have to pay the full cost of the product, which makes it expensive. Also, some people with certain medical conditions may not be able to use it. It would normally only be recommended by a specialist. This is because minoxidil is not licensed for alopecia areata. It is licensed for other types of alopecia, such as male pattern baldness. If it works, it usually takes 2-3 months of treatment for an initial response and one year for a maximum response. There is no point continuing with this treatment if there is no improvement after one year. Topical immunotherapy

It is thought that topical immunotherapy is the most effective option for people with extensive alopecia areata. However, this treatment is only done by some skin specialists and so you will need to be referred to one of these specialists for treatment. How topical immunotherapy works is not clear. A substance is put on affected skin to make the skin react like an allergy. A commonly used substance is diphencyprone (DPCP). Increasing strengths of this substance are placed on the affected skin once a week over several weeks until the skin looks like it has mild dermatitis (eczema). The skin reaction seems to affect the process involved in causing alopecia areata in some way to allow hair to re-grow. Sideeffects can be troublesome. For example, some people develop severe skin reactions. Treating children with topical immunotherapy is controversial.

Once re-growth occurs, treatment can be stopped but, in many cases, the hair loss then recurs. Therefore, regular maintenance treatment is often needed to keep the hair loss from returning.

Wigs are a common treatment choice in patients with alopecia areata. You can get some wigs on the NHS. However, this needs a referral to hospital as only a skin specialist can sanction the prescription of a wig on the NHS. Other treatments Various other treatments may be used or advised. These include the following:

A final note about treatments

As you can see from the section above, there are various treatment options. It is difficult to say from the outset whether a particular treatment will benefit a particular person. One of the difficulties is that hair grows back without any treatment in many cases. Therefore, it is difficult to research the effect of treatments, as hair may re-grow naturally. Generally, the success rate for the various treatments is probably not high. Also, there is no guarantee that any hair re-grown during treatment will persist once the treatment is finished. 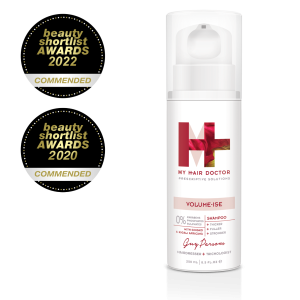 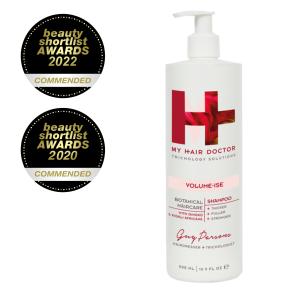 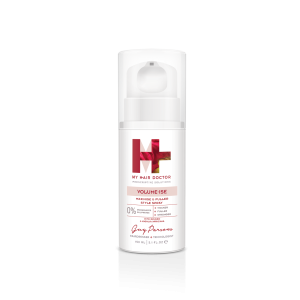