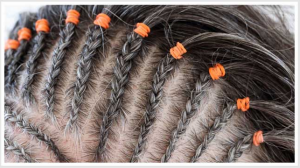 Traction alopecia is a form of alopecia or gradual hair loss, caused primarily by pulling force being applied to the hair. This commonly results from the sufferer frequently wearing their hair in a particularly tight ponytail, pigtails, braids or weaves. It is also seen occasionally in long-hair where men and women tie their hair in tight plaits, braids or buns. Traction alopecia is recession of the hairline due to chronic traction, or hair pulling, and is characterized by extreme thinning or in some caes baldness around the hairline or other areas on physical examination.

It is commonly seen with certain hair styles or braiding patterns that pull the hairline, or other hair tightly and away from the scalp. It has also been seen in female ballerinas. Traction alopecia is caused by either weight or extreme tension on the areas of the hair affected. It is not resultant of hormonal factors in men or women. Traction Alopecia is one of the most common causes of hair loss in black women. 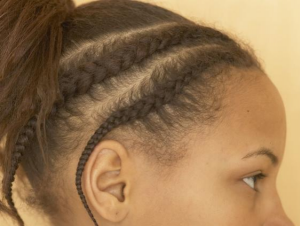 lthough the aforementioned style is one of the culprits, hairstyles such as dreadlocks and single (extension) braids can also have the same effect. Men and women who have suffered from traction alopecia have found that the hair loss occurs most at the hair line – primarily around the temples and the sides of their heads.

Chemicals. A condition known as CCCA (central cicatricial centrifugal alopecia), seen almost exclusively in black women, can cause extensive hair loss. It is caused by a combination of too much stress (traction) on the hair and the use of harsh relaxers and dyes, which may damage or break the hair from the strength of the product itself or from too much exposure and placement of the product on the hair for too long.

Repetitive use of braiding or tight ponytails can and will over time have a severe effect on the hair follicles ability to regrow, over time permanent scarring and damage may be caused.